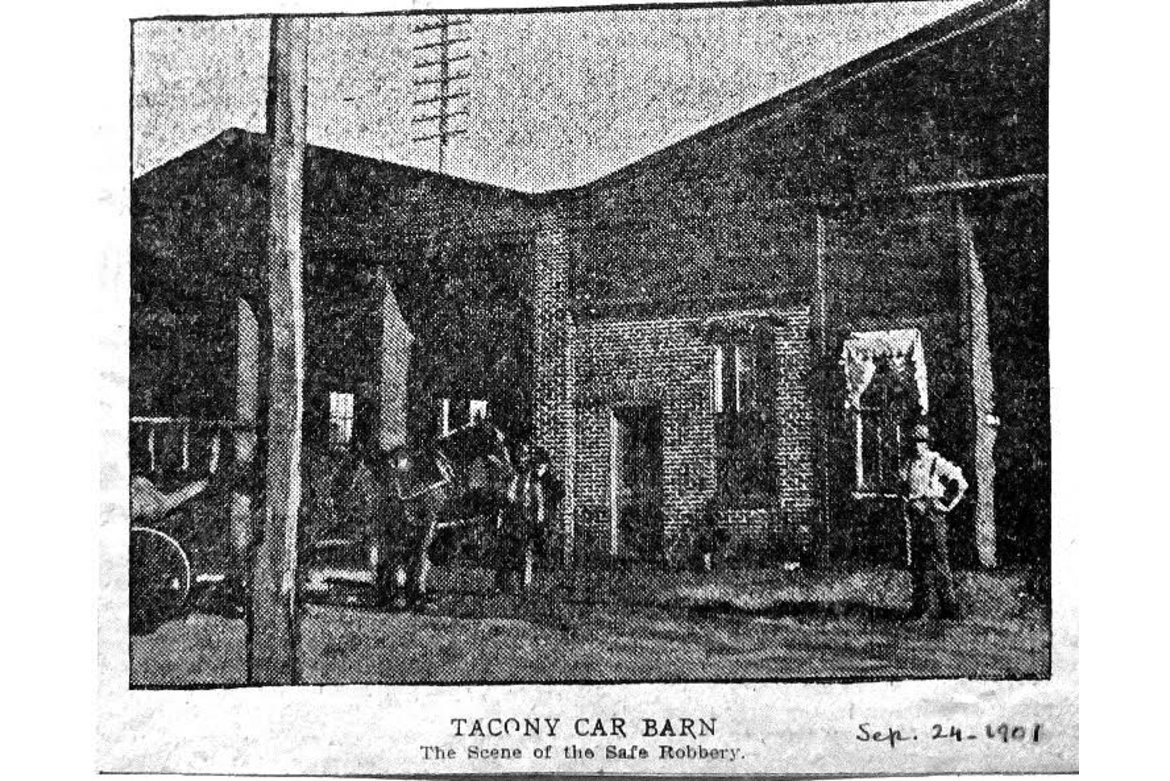 Early in the morning on September 23rd, 1901, there were only five employees at the car barn of the Frankford, Tacony, and Holmesburg Railway Company located on State Road and Robbins Street. The last car had only just departed at 2:15; operators Hugh Garr and Michael Kelly, and conductor Nathaniel Walton were asleep in a closed car while two electricians acted as watchmen. George Nolan was working in the pit between two tracks when he was suddenly attacked by two masked men. While one held a gun to his head, the other bound him with picture hanging wire. At the same time, Clarence Depew walked out of the company office and was also attacked and bound.

Nolan and Depew were locked in a store room with two armed guards while six other men went to work on the safes. Using sledgehammers, the bandits knocked off the knobs and combination plates of the safes, then they inserted homemade nitroglycerin into the holes and lit the fuse. A few miles away, Lieutenant Dungan of the Tacony Police was awoken by a loud explosion. Dungan jumped out of bed, summoned his patrol wagon, and sent scouts in every direction to find the source of the noise.

While the police were attempting to determine where the explosion came from, the eight robbers were escaping with $600 from one safe and $500 from the other. Just behind the car barn were the Tacony Waterworks and the storehouse of Thomas Dooling, a junk dealer. The men broke into the storehouse, stole Dooling’s 15-foot skiff, and made off with the money across the Delaware River. Dooling’s boat was later found adrift two miles from his warehouse.

After the robbers left, Nolan and Depew stood back-to-back and began working on the wires around each other’s wrists. After half-an-hour, they managed to remove their bonds and Nolan ran to the phone to alert City Hall. While a telegraph was being sent to the Tacony Police Station, Nolan and Depew ran a trolley car to the station and returned with Lieutenant Dungan and several other policemen. Somehow, the three men asleep in the barn were not awoken until the police arrived, despite the explosion.

Police spent the morning canvassing the area for clues. It wasn’t until several hours after daybreak that Detectives Geyer and Long found an abandoned boat, the Emma, a quarter mile from the Tacony Waterworks. None of the rivermen in the area recognized the Emma, and police believed that the bandits had come to Tacony in it, then abandoned it after the heist. The abandoned boat, a description by Depew of one of the robbers who dropped his mask to spit out his chewing tobacco, and a description of a stranger seen by an employee of the Disston Saw Works were the only clues to the identity of the thieves.

Immediately, it appeared that this robbery must have some connection to another crime that had gone nearly three years unsolved. In June of 1899, around half-a-dozen armed and masked men broke into the office of the Fairmount Park Trolley Company in Belmont. Like in Tacony, the six employees on duty were tied up with picture hanging wire.

In the case at Fairmount, the bandits attempted to blow up the safes but were unsuccessful. Instead, they used tools from the trolley station to break open the safes and made off with more than $3,000. Curiously, they gave each of the bound employees $16 before departing with the rest of the money. An employee of the trolley company was arrested on suspicion of his involvement, but was never charged. A similar robbery also took place in New Jersey that year at the Somerville Beef Company; a safe was blown open, but in that case the thieves also shot Assistant Chief of Police Crow, who later died of his injuries.

Based on the connection found to boats on the Delaware River, police first suspected that they might find information relating to the identities of the bandits in New Jersey. Detective Miller and his staff crossed the Delaware River to Palmyra and spent an evening searching the New Jersey shore of the river, but found nothing. For months, there were no leads in the case, but the patterns of previous robberies told investigators that there would be another attempt somewhere soon.

It happened in February of 1902 at a bank in Lancaster. Seven or eight men attempted to rob the Gap National Bank, but were thwarted when one of them was shot in the mouth by watchman David Stamix. All of the robbers, including the injured man, escaped empty-handed. But later that day, having heard about the attempted robbery, an officer on a train became suspicious of a man whose face was bound and clearly injured. This man, John Thomas, was placed under arrest and confessed to the attempted robbery, but he did not give the names of his accomplices.

Following this first arrest and the robber’s failure at the bank, Philadelphia police received a tip that the same band of thieves was planning another car barn robbery. This time, the police force was ready and for several days all of the car barns in the area were heavily guarded, but no robbers came. Then, on February 21st, 1902 police learned that the gang was using a house at 9 Kenworthy Court on Cherry Street, located near a soup kitchen and a bath house, as a base.

The house was put under surveillance, and when all of the residents apparently went to bed late that night, a raid was planned. At 5 o’clock the next morning five detectives and nine policemen assembled in the station house located at 11th and Winter streets. They split into two patrols and entered the house on Cherry Street heavily armed shortly after 6. Fortunately, there was no need to use force as everyone in the house was asleep.

The first man was found sleeping on the first floor. He was bound and delivered to a police guard outside. An additional 12 people were found and arrested on the upper floors. Seven of those arrested were believed not to have much to do with the crimes of the others and were sent to the House of Corrections for three months each. They were Mary Brown, Michael Donahue, James Anderson, Steve Fox, Herman Ogle, Richard Brien, and John Larkins. The members of the gang arrested were George Jordan, John Lee, Walter Kline, William Kane, William Chase, and Harry Reynolds.

Each of the thieves arrested had some sort of criminal record: George Jordan was wanted for the murder of his suspected accomplice, George Smith, in Newark, New Jersey; John Lee and Walter Kline were wanted for several robberies in Pennsylvania, New Jersey, and New York; William Kane was identified as having been involved in a robbery of a store on 10th and Chestnut St; William Chase was known as a general thief; and Harry Reynolds had a record in both Philadelphia and Reading.

Because of how many crimes each of the men involved had been suspected of, local police determined that each would be handed over to the authorities who could prove the most serious charge against him. Kane was sent to Somerville on the charge of murdering their Assistant Chief of Police Crow and George Jordan was indicted for murder in Newark. Before leaving Philadelphia, Jordan confessed that he and several others had robbed the Tacony Car Barn in September of 1901. Jordan told police that he made his own nitroglycerin, and that he had also participated in eight other jobs in the Philadelphia area. Thus, the mystery of the Tacony Car Barn heist, along with several other robberies, was solved.